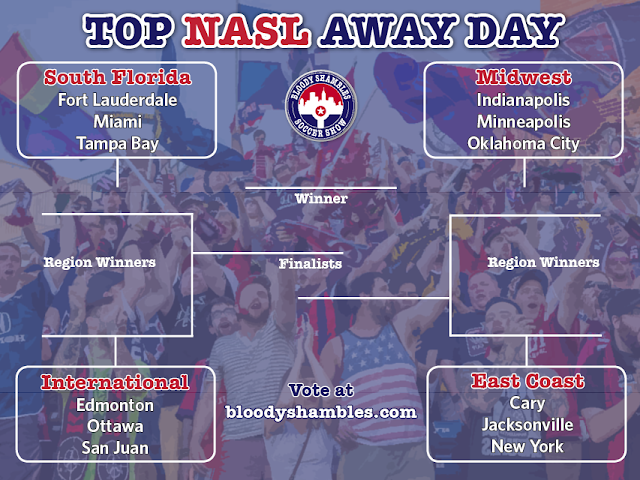 If you could visit any NASL opponent’s city and stadium for an away day, where would you go? With the Bloody Shambles NASL Away Day tournament we’re going to identify the league's top away day.

Each of the league’s 12 teams have been placed in one of four regions - South Florida, Midwest, International and East Coast - in a bracket-style tournament to determine the league’s most appealing cities for supporters to visit.  Seven votes across three rounds will be conducted at BloodyShambles.com. Voters should NOT vote for their home city. Voting for each region or matchup will remain open for approximately four days.

Criteria for casting your vote could include, but is certainly not limited to, the opponent's supporters culture, the expected matchday experience, your general desire to visit a city, or any other personal preferences you might have. (Quality of local breweries is a key criteria for me.)

With that out of the way, let's jump into voting for the first two regions, South Florida and the Midwest:
VOTING HAS CLOSED FOR THIS ROUND

Posted by Brandon Cockrum at 11:55 AM