Congratulations to Puerto Rico FC and the city of San Juan for winning the first ever Top NASL Away Day! The island club is the first ever recipient of The Walter Restrepo Away Day Achievement Award.

While this is likely the only “hardware” that the expansion club will win in 2016, it’s nonetheless an accomplishment worthy of pride. In just over one month of play in the NASL, the football club, owned by pro-basketball player Carmelo Anthony, has already established itself as the most desirable city for NASL supporters to visit. The chance for soccer travelers to make a beach holiday out of the away match certainly helped San Juan's chance at winning, but the club’s supporters, stadium and match day experience were also significant features that appealed to voters.

"When you come to Puerto Rico you come to paradise! When you come to Juan Ramón Loubriel, you'll see some of the most passionate fans in the league. Electric atmosphere! Everybody is welcome to our Island!" - @BarraNaranjaPRFC (@BarraPrfc) 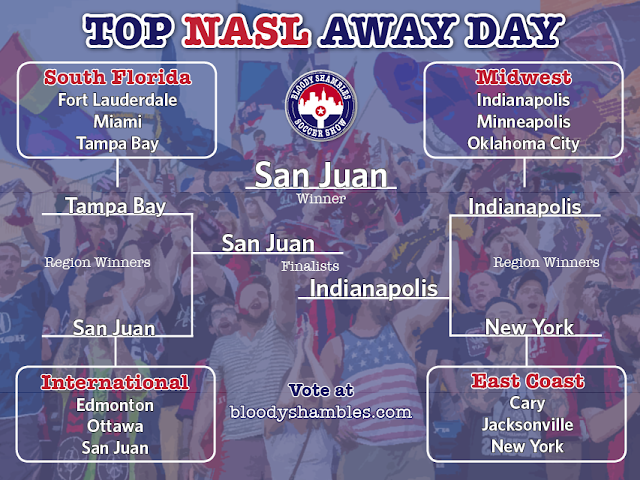 More than five hundred votes were cast in the competition pitting all twelve NASL cities in a bracket-style tournament to determine the NASL's most appealing city to visit. San Juan beat out Indianapolis in the competition’s final round, with 62% of voters preferring a trip to the island territory. In previous rounds, San Juan also edged out Tampa Bay, Edmonton, and Ottawa. Indianapolis advanced to the finals with wins over New York City, Minneapolis, and Oklahoma City.

The prestigious, international award is named after professional soccer player Walter Restrepo, currently on loan to the USL’s Bethlehem Steel from MLS’ Philadelphia Union. In 2014, Restrepo was traded from the NASL’s Ft. Lauderdale Strikers to the San Antonio Scorpions for the eye-catching price of “free lodging and transportation during Fort Lauderdale’s two road trips to San Antonio in 2014.” The creative deal has been recognized as one of the most unique trades in sports. On the field, Restrepo has twice been named to the NASL’s Best XI and twice lifted the NASL’s Soccer Bowl as league champion.
Posted by Brandon Cockrum at 12:57 PM