Indy Eleven is holding out for a hero in their backline 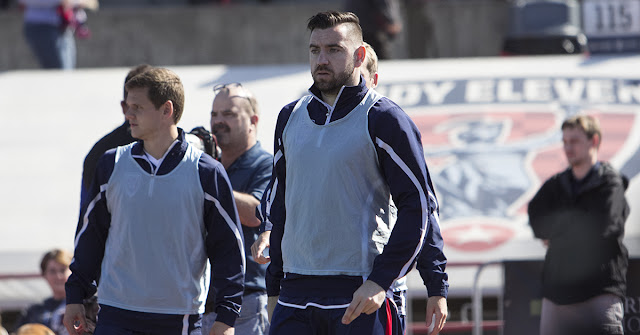 Falvey was available for last Saturday's match against Puerto Rico
By: Brian Cook

If you watched Saturday's draw with Puerto Rico FC you witnessed what can only be described as the best and worst portions of soccer. You saw a high scoring game but for Indy Eleven fans you also saw fixable defensive mistakes. Mistakes that were the difference between an early - season defining game and one that may play a bigger role later on in the season.

Regardless of the circumstances Indy were found to be unlucky Saturday as they lost a two goal lead and barely escaped with a point to show for their efforts. While nothing should be taken away from starting lineups for both games as they were clearly the top performing players for Indy so far, the first goal given up by the Eleven put a light over the huge missing piece in Indy's defensive efforts:

Falvey, recovering from a late off season sports hernia surgery, was on the bench Saturday. While the circumstances weren't deemed difficult enough to warrant bringing on Falvey who, as was mentioned by Hankinson during the week, fresh enough for 20 minutes or there about the defense had struggled and let Puerto Rico slam them with their attack.


The goal, while skilled, gives you a great observation of the issues presented with the current backline for the Eleven. The ball seemingly floats into the box and Watson Siriboe acts as if he is stuck in quick sand watching as Conor Doyle snaps a shot into the left corner of the net.

Again, while only two games into the 2017 season the goal is a clear sign of the issues still facing the starting eleven for Indy. Daniel Keller and Kwame Watson-Siriboe have started both game and while it's clear they had earned the start based off of the Deltas game the result last Saturday spells more about the lack of communication and skill beyond the midfield.

For comparison, 2016 saw Indy Eleven play Tampa Bay Rowdies in Florida. The game took place on September third and the backline had little depth (no real defensive substitutions were available for the game). With Keller and Falvey lining up side by side in the center it was almost like they were stretched to help out on both sides of the backline.


For clarification purposes, Daniel Keller was on the left hand side of that heat map and Falvey was next to Palmer on the right center defender portion. The heatmap can give you a good idea of not only where the players are on the field but in this case how wide they were able to cover together.

This is the heat map from the Puerto Rico game with Daniel Keller and Kwame Watson-Siriboe which shows considerably less amount of distance shared between the two but also a considerable hole between them that both Doyle and Ramos exploited:

From this comparison it's more or less that Keller and Watson feel stuck and either aren't able to move out to help out or are not sure what will happen if they do. A feature of the lack of your obvious best defender and confidence boosters for other members of your backline being sidelined.

This isn't to say that Daniel Keller and the first year boy in blue Kwame Watson-Siriboe are bad players. Nor is it a fist to throw at the leadership between the sticks of Jon Busch who has had his fair share of leadership advances for Indy since joining last year but there is a difference in the eye both statistically and on the pitch when you don't have the person who ties everything together.

Going back to the play in question, a clear lack of marking which featured an astounding eight players watching as Conor Doyle placed the ball in the back of the net. Let's say that play again carries on the same way and instead of Keller or Watson you have Falvey. You may still see a shot on goal but based off of previous games and heat maps you would more than likely see a more fluid swapping of positions and communication.

You would see, perhaps, Doyle go to hit the kick and instead of Watson watching the ball fly by him he's a half a foot over closer to the center of the net and is able to stop. You might see that Keller was able to close down on Doyle before he gets the shot off. You may even see Falvey himself on the ball and able to clear it away.

Let's compare another match from 2016 which featured the highest quality centerback pairing since Indy Eleven began play. Greg Janicki's 2015 season was less than stellar which left many people confused when Hankinson chose to keep Janicki with the club heading in 2016. No one truly saw the impact that Falvey's arrival would have on Janicki's game and the partnership they formed was a huge part of 2016.

The October 22nd match between year one club Puerto Rico FC and Indy Eleven saw one of the strongest showings of Indy Eleven. Not to be outdone by the scoreline when you investigate the centerback position and the heatmap for both Janicki and Falvey you see the strength of their partnership and the depth they were able to achieve from the position.

The heat maps provide incredible insight into not only how the teams layout over the course of 90 minutes but also the difference in how a back line not led by Colin Falvey performs. His insight, voice, leadership and direction was a pivitol part of the club's success in 2016. It's also clear from the San Francesco game that both Watson Siriboe and Keller are good centerback options but aren't able to lead the defense and provide depth beyond the basic skills of a centerback like Falvey is. Both players will improve with Falvey on the field. At this point it's unclear when you will see Indy Eleven's captain take the pitch in 2017 but after the match against Puerto Rico it's clear that the timetable for his return should be moved up if it can be.
Posted by SoccerwithBrian at 3:43 PM