The Curious Case of Gerardo Torrado

The signing of Gerardo Torrado was announced by the Indy Eleven on June 8 at a crowded press conference in a Hollywood hotel, far from the Eleven’s headquarters in downtown Indianapolis. A large contingent of Hispanic and Latino media from across North America reported from the event, introducing the second division, Indiana-based club to entirely new audiences and markets. It was a coup for the Eleven, securing the signature of a player that had been rumored to be signing with MLS’ Los Angeles Galaxy, in more ways than one. Not only were they getting a three-time World Cup veteran from the Mexican national team and former Cruz Azul captain and legend who instantly increased the club’s profile, they were also signing one of North America’s best defensive midfielders over the past decade.

Back home in Indiana, the Eleven were preparing to put the finishing touches on what would become an undefeated and championship NASL Spring Season. Their match three days later would see the team operating in peak mode, scoring the required four goals and winning the match by a three-goal margin to take the title. The 37-year old Torrado even made his first appearance at Carroll Stadium for the match, looking quite amused by the scene unfolding in front of him - the Eleven's massive victory and a few thousand fans rushing the field at the final whistle in raucous celebration. With a spring championship and playoff berth in hand and a world-class midfielder added to the roster, the future was burning bright for the Circle City club.

The club’s momentum continued over the league’s summer break. A road trip to Chicago saw the team come up just short of MLS’ Fire in the US Open Cup. A narrow victory was won over Liga MX champions Pachuca in a friendly at Carrol Stadium. The strong performances transitioned into the fall season, with a draw and two victories in the fall’s first three matches. Over the club’s first 13 league matches in 2016 they posted six wins, seven draws and, most noteworthy, zero losses.

The Saturday began so well, with beautiful skies and perfect temperatures both in Indianapolis and in Minneapolis, where the Eleven hoped to secure at least one point and a league-record fourteenth match without defeat. With two goals in the first six minutes it became apparent that Minnesota United FC, a club that Indy had on more than one occasion played foil to, had no intentions of rolling over and allowing Indy to establish a new league unbeaten record.

While he was able to play in the friendly versus Pachuca, Torrado’s league debut for the Eleven had been delayed by paperwork and Visa issues, causing him to miss the first three fall matches. Trailing Minnesota by two goals at halftime offered a no risk, high reward opportunity for Torrado's first league action. And, while Torrado was not able to save the Eleven from suffering their first defeat, he did display ability that was a cut above many of the other players on the field. For 45 minutes, “el Borrego” ("The Sheep," as Torrado is affectionately known in Mexico due to his curly hair, now shorn) dazzled viewers with his keen vision and deft passing ability, in addition to his well known defensive abilities. Deployed further up the pitch than he traditionally has played, Torrado offered a glimmer of hope due to the many chances he created for the Eleven on an otherwise disappointing evening.

After the match it seemed clear that Torrado was ready to start with the first team, but the question was, where to play him? "The Sheep” had made his name as a defensive midfielder, but if his performance in Minnesota was an indicator, his world-class technical skill, vision and tactical acumen might allow him to be an offensive maestro for the Eleven.

Through the Eleven’s first 14 league games, Brad Ring and Nicki Paterson had been utilized as the primary starting central midfielders. The pair complemented each other well: Ring focused on winning the ball and keeping possession while Paterson played slightly more advanced and took more chances with his distribution. Ring, the local college boy done good; Paterson, the UK mercenary with a decade of professional experience in American leagues. Ring the fan favorite; Paterson, a favorite of the team’s European players. It was a winning combination, or at least one that refused to lose. With Torrado now in the fold, and by all appearances ready to make quite an impact, one of these two would be relegated to a support role.

Fast forward ten matches and the question of where and how Torrado would be utilized by coach Tim Hankinson has been answered - Tornado replaced the plucky Paterson in the center of the team. New questions have arisen, however, most commonly, What the hell has happened to the Eleven?

After going undefeated in thirteen of their first fourteen league matches, the Eleven have now gone just over a month without winning a match, posting two draws and three losses, outscored 10 to 5 across the five most recent matches. To be fair, four of those five matches were on the road, but Indy’s dominance in prior matches against those same teams saw them rack up four wins and three draws, outscoring the opponents 11 to 3. The club’s performance prior to and after the inclusion of Torrado mirrors this recent trend: 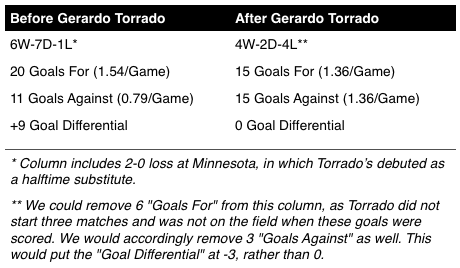 So, it sounds like you’re saying that Paterson is a more effective player than Torrado? Well, I thought that may be the case (at least in 2016), so I took a look at their individual statistics. Torrado is a more accurate passer in the opponents half of the pitch and wins a few more tackles. Paterson attempts more crosses and is more accurate with them and he has more assists.  If anything, Torrado appears to be the more effective player.

The central midfield is the engine room of the team, heavily involved offensively and defensively, and often in possession of the ball as defense transitions into offense, possibly the most important facet of the game. The difference, and possibly what has thrown off Indy’s mojo, comes down to the two central midfielders playing style and relationships with teammates.

Torrado has spent his career as a defensive-oriented central midfielder and is a VERY similar player to Brad Ring. The coaching staff might encourage him to get forward and to be the offensive creator that this team desperately needs, but Torrado has years of habit to break. Being a midfield maestro is just not in his nature. He may be able to do it eventually, but, as the Mexican saying goes, you can’t teach an old borrego new tricks.

Paterson, on the other hand, served as a nice compliment to Ring’s defensive and possession-passing tendencies. The Scotsman was comfortable taking the chances that a creator must take: playing a through ball to a streaking winger or switching the point of attack with a long ball across the field. He’s not a traditional number 10 maestro, but Paterson was able to get the job done and the Eleven hold the spring championship shield to prove it.

There’s also the issue of team chemistry. Paterson has a few years experience playing with center back Colin Falvey and quickly connected with Irish striker Eamon Zayed. The communication and brothers-in-arms bond formed a UK-strong spine up the center of the field. As a high-profile, mid-season arrival, Torrado missed the long, hard days of pre-season training with the team, where so much of the team's chemistry and personality is established. It also wouldn’t be the first time that a team was thrown off kilter when a respected teammate was moved to the bench in favor of a new signing.

In effort to right the ship, I would insert Paterson back into the lineup to see if that reinvigorates the club’s performance. There is actually a very small sample that backs up this theory: Paterson and Ring started together in Indy’s 5-2 shellacking of Jacksonville Armada. The Eleven were up 4-1 before Torrado replaced Paterson at about the 60th minute.

Second, I would pair Paterson with Torrado in a match to see how that duo works together. (Sorry, Ring fans!) Third, it seems worthwhile to explore playing a 4-3-3 with Paterson (or Dylan Mares) playing more advanced and Ring and Torrado as holding midfielders that provide cover for fullbacks that move into attacking positions. Let’s see how the team functions in a match with the best players in their preferred positions.

It would be unrealistic to expect the Eleven to lose only once in every fourteen matches. The club had a very favorable spring schedule, playing the league’s top teams at home and the bottom-of-the-table clubs on the road. A let down was surely coming, but no one was expecting to be let down this harshly. Playing surfaces, travel fatigue, injuries and suspensions, and even uniform choices have been suggested as causes for the team’s struggles over the last few weeks. I’m not saying that Gerardo Torrado is the reason the club has been lackluster, but I do think the club needs to reexamine Torrado's role on the team and work to find the most effective central midfield combination, if they want to reach the heights that seemed within their grasp at the conclusion of the spring season.
Posted by Brandon Cockrum at 10:04 AM