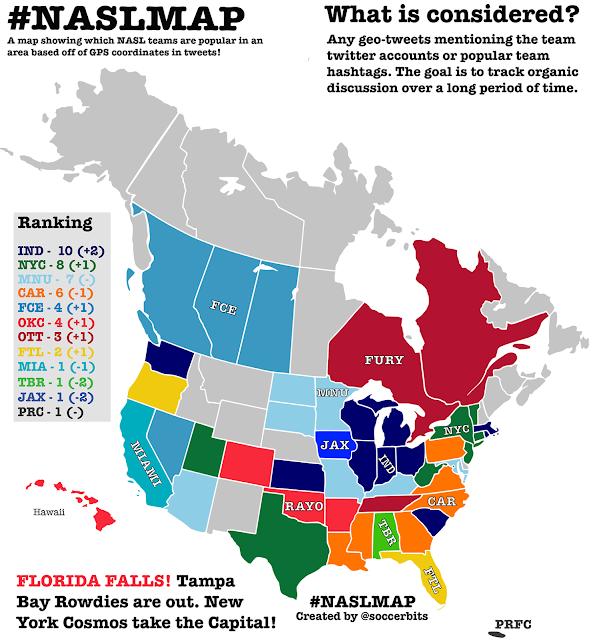 For the first time this year the State of Florida has changed hands. Tampa Bay Rowdies slump in form is mirrored on the map as is the current state of all of the Sunshine States teams. After a poor start to the season the Strikers are putting together some points, as a result they are the only Florida team gaining ground on the map.

The Strikers lost Nevada to FC Edmonton thanks to one certain Eddie having more fun tweeting than playing slots in Las Vegas. But the Strikers took their home state, Fort Lauderdale are now the boss of the swamp! Not content with only winning Florida they also took Oregon from Minnesota while they were evacuating from Nevada!

However, all is obviously not well with Florida Soccer, Miami FC and Jacksonville Armada anchor the bottom, both eliminated from the Spring Championship, Tampa can't catch a break and now find themselves level on points with their rival Strikers. The slump in performance of Florida Soccer is reflected clearly on the map as all four teams combined to lose a total of SIX states!

Probably the worst news since they rebuilt the Death Star, the New York Cosmos combined forces with Donald Trump and One World Sports to take control of the nations Capital. Jacksonville have vacated DC and hang on to their only hiding place in Iowa by a thread!

New York, not content with going top of the league table just had to start messing with the White House as well. Shame on them. The Cosmos were involved in a lot of action, they increased their state count by one, but they did it by gaining three states and losing two.

The only grey state claimed this week was West Virginia which Cosmos now own, they also took Connecticut from Miami FC and as mentioned DC from Armada. They lost two vital staging points however, Indy Eleven taking positions to the east and west of New York in Michigan and Massachusetts.

There will be dark days ahead unless we can get those pesky New Yorkers out of the Oval Office!

Indy Eleven and Minnesota United all out war, Indy Wins!

Probably the most exciting game to watch over the weekend, a six goal thriller caused all kinds of scraps on the map. The game itself was popular enough to see many people tweeting about both teams.

Minnesota United's hold on the map did not change, they had seven states before this update and that number remains the same, however they lost two states and gained two other states. Indy Eleven traded Missouri with the Loons for Wisconsin as fights broke out all across the Midwest!

Minnesota lost Oregon to the Strikers before winning Maryland from the Tampa Bay Rowdies. And as mentioned Indy took Massachusetts and Michigan giving them glory on the field and on the map over the Loons.

Rayo OKC despite losing at home managed to up their real estate by stealing Arkansas from Carolina Railhawks who drop to 6 states, OKC now has four.

Those strange people from north of the border took a break from building that wall to keep Trump out of Canada, and both the Eddies and Fury grabbed some US soil. As mentioned earlier FC Edmonton took a gamble on Nevada, and Ottawa Fury gained Tennessee from Jacksonville.

No doubt with two Canadian holes in the USA they will start streaming in, Canadian dollar is horrible right now, even Tim Horton's coffee is being watered down and people are reaching out to bacon banks for food.

Puerto Rico FC still have a guy in a hammock under a palm tree drinking from a coconut and occasionally tweeting, they are not bothering anyone and nobody else seems to care. They did manage to get more team tweets than Miami FC over the weekend though. More signs of Armageddon in Florida!

All results are based on cumulative twitter activity from all official team handles and hashtags tweeted by anyone since April 1st 2016. We only collect data from people who have GPS location enabled on their posts, if you don't enable location then your tweet will not count or help in gaining ground on the map.

Please also follow @Soccerbits and @Bloody_Shambles for extra content including random updates, international news and pie charts such as the one below showing the teams most tweeted about over an NASL weekend