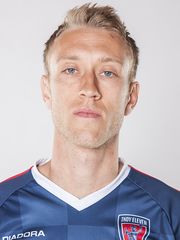 Indianapolis, IN- The Indy Eleven announced today that Brad Ring will be back in Indianapolis for 2016.  He returns to a team that has broken hearts with a bevy of player options declined in recent days. The 28 year old fan favorite will help to stabilize a tumultuous off-season that has already seen 16 players return their checkers or just plain put them on Ebay. (It's for a good cause)

Ring rejoins 8 other 2015 teammates that are currently on the roster for the upcoming campaign and he is 1 of only 3 players from the original team that launched in April of 2014.

Members of the Brickyard Battalion and west end supporters will welcome Ring back with open arms quite literally as they once again hope to pull Ring into the smoke-filled chaos known as the Brickhouse.  Ring earned himself plenty of fan recognition after he rocketed home his lone goal of the season and followed it up with his famous attempt at a "Lambeau Leap".  It was a move that undoubtedly earned him, Player Of The Year, Moment Of The Year and Goal Of The Year honors in 2015. 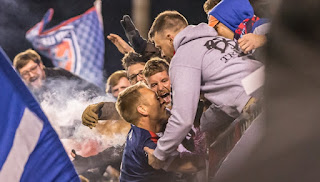 However inspiring it may have been, it should be noted that jumps of that nature are not common among Bears Fans.  Ring came up just a bit short of his intended mark and witnesses in the stands that day have stated that Ring had to be hoisted up to maintain his perch in the heart of the BYB.

It is unclear how head coach Tim Hankinson intends to utilize Ring, but he has a spot on the team and a shot at returning to a starting midfield role.  One thing is clear about Hankinson and his current team is that last years results will not be tolerated. Last season's roster has been dismantled and is being  carefully reassembled piece by piece.  Players are being considered not only for their strengths, but how they will play alongside specific players.